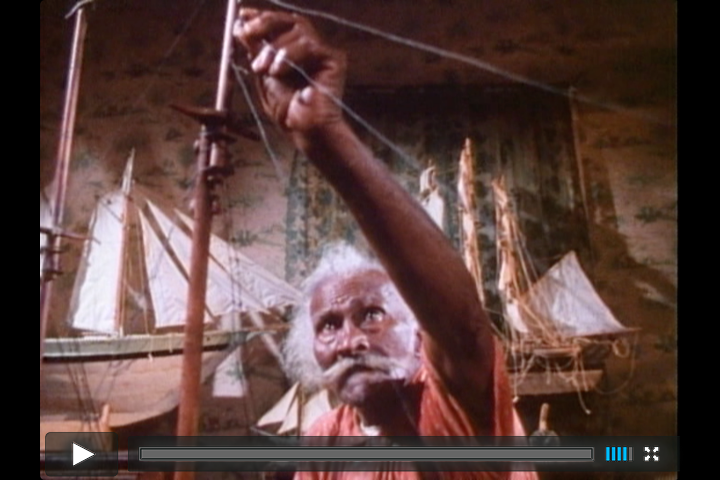 AMERICAN TREASURE is a 30-minute portrait of an extraordinary folk artist. Joaquim Miguel Almeida is from Cape Verde, the island archipelago nation located 360 miles off the northwest coast of Africa. There he learned to carve the model whaling ships and packet vessels heard in the poetry, recalled in the memories, and told in the folklore of Cape Verdean-Americans, the first black people to immigrate to the U.S. voluntarily.

He has continued in an artistic tradition taught to him by his ancestors when he was a child. Filmed entirely in the historic old whaling port of New Bedford, Mass,

AMERICAN TREASURE pays tribute, not only to this gifted artist, but to the history and culture of a unique American people.

NEW BEDFORD – The formula for a romantic movie used to be, boy meets girl, boy gets girl, yhey marry and live happily ever after.

In the case of Kathryn Golden and Ashley James, the formula is a little different: Boy meets girl…and they make movies together.

The husband and wife team are in New Bedford making a 30 minute documentary film, focused on a Cape Verdean American artist. Joaquim Miguel Almeida, who will be 85 this month followed the traditional sea path from his island homeland to the United States, traveling on many ships before entering the United States after World War I.

The movie-makers met Almeida when they made their first film about this city’s Cape Verdean American community three years ago, “Tchuba Means Rain.”  “We were interviewing and taping older members of the Cape Verdean community here,” Ms. Golden said. “We went to Jac’s apartment and we were overwhelmed: it was more of a studio than living space.” Almeida has filled his apartment with hand-carved model sailing ships fitted with hand-sewn sails.

Cape Verdeans turned to the sea when agriculture on the islands was hit by drought. Not surprisingly, Cape Verdean seafarers began to whittle and carve models of the whaleships and schooners that lay at island docks and moored in the harbors. Almeida still remembers his uncle, carving little ships by the docks…and he has kept that tradition alive in the United States. Ms. Golden noted that hand-carved boats have played a role in some of the Cape Verde’s major religious feasts. But Almeida’s hand-sewn schooners, barks and whalers are more elaborate than those of his childhood, she said, with movable parts, full-rigging and hand-made sails.

Almeida represented the Cape Verdean community in a Bicentennial exhibition in Washington in 1976, where he exhibited his models, danced with the Cape Verdean Folkloric dance troupe and was a living representative of the older Cape Verdean seamen who manned the ships of New Bedford.

Shooting the film in a summer of record heat belies the notion that movie making is glamorous, James said. They used 4,000 watts of light to illuminate the work for their 16mm movie camera and the temperature reached 96 degrees. Their star for all his 84 years did not seem to mind the heat.